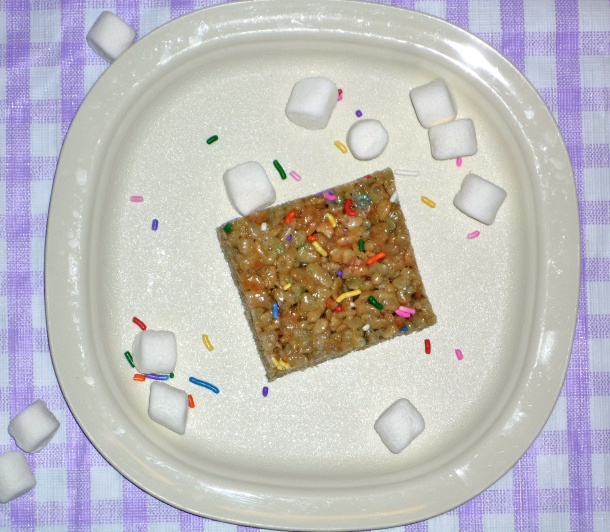 Sorry, this was supposed to be my triumphant sourdough post.  I guess I had some issues.  To be honest, I did realize after the first rise that something was wrong but I had already waited two hours and I couldn’t wait any more.  I will just keep trying.  Trust me, a really great homemade sourdough is worth it.  Even a not so great one still made my house smell awesome. 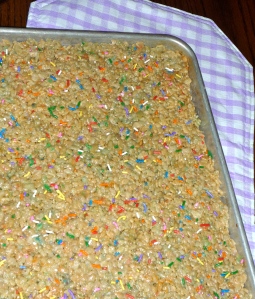 It did not fill up the sheet pan, FYI. Can you tell I added some sprinkles too early and they melted, o well.

In the meantime, I have some not quite so baked treats that I have kind of been obsessed with.  For all you readers out there still making plain rice krispie treats (which are great, don’t get me wrong), you are missing out.  Even just today, Brown Eyed Baker put up a recipe for Peanut Butter and White Chocolate Krispie Treats.  I have two different kinds that I have made in the last two weeks, cake batter and brown butter with pumpkin pie spice.  Can you believe I made two batches of the cake batter during that time and hardly got any?  I can’t complain, at least I go to taste them.  Poor Angela didn’t get any.  The first batch went to Sarah’s preschool for snack and the second batch was for my nephews’ Family Fun Day at school.  I did cut one of those up into fourths for us to share but Robert found Angela’s piece and ate it.  I had planned on making a hot chocolate rice krispie treats for the Family Fun Day but I didn’t have cocoa krispies and I thought I did.  I’ll have to make those next. 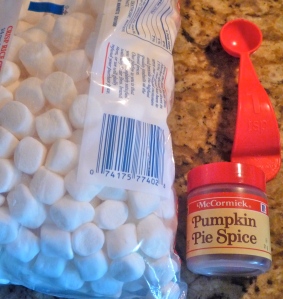 I had seen the brown butter pumpkin pie spice krispies and, of course, they had me at brown butter.  Both of these recipes, I had to amp up the flavor a bit from the original recipes and the overall quantity because for Sarah’s class I needed 30 and for the others I just wanted nice thick almost Disneyland sized treats.  I am sure I will do the same with the hot chocolate krispies when I get around to making those. 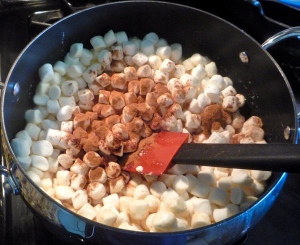 As far as the home front, still no kitchen lights.  My husband and I spent all night working on it, to no avail.  So we called in the big guns, basically the family electrician.  She lives 2-3 hours away (depending on traffic) and she offered to check it out for us because she didn’t want us to get ripped off.  Family rules!  Here’s to hoping she can help.  Then I can bake late at night (without interruption, yay!) and take halfway decent pictures instead of trying to fit in everything during daylight. 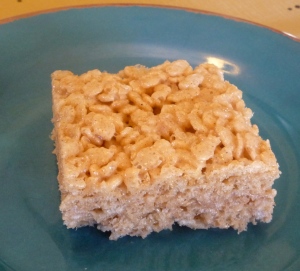 My GeekyLink for the week is of course The Avengers movie trailer.  I am sure everyone has seen it by now but I mean, what else could it be?

adapted from gimme some oven

Melt butter in a large saucepan over low heat and add marshmallows.  Stir until they begin to melt, adding in cake mix slowly and mixing as you do so its combined.  When marshmallows are completely melted remove from heat.

Stir in cereal so it is completely coated with marshmallow mixture.  Sprinkle in half of the sprinkles and mix.

Press into a baking dish coated with non-stick spray and sprinkle with bit more cake mix if desired (no more than 2 teaspoons) then top with remaining sprinkles. Let sit for about 30 minutes before cutting.

Once your butter is melted continue cooking until your butter starts to brown.  It will turn a golden brown and smell awesome.  Be careful not to burn because once the butter begins to brown it can burn quickly.  Stir up any brown bits.  Add your marshmallows and pumpkin pie spice.

Stir until the marshmallows are melted.  Remove from heat then add your cereal.

Press into a baking dish coated with non-stick spray.  Let sit for about 30 minutes before cutting.

My name is Celina. I am a wife and mother of three. I love to bake, go to the movies, read when I can and I am kind of a great big nerd. Just don't tell my husband.
View all posts by NerdyBaker »
← Pull Apart Cheesy Herb Bread
Pear Crumb Bars →