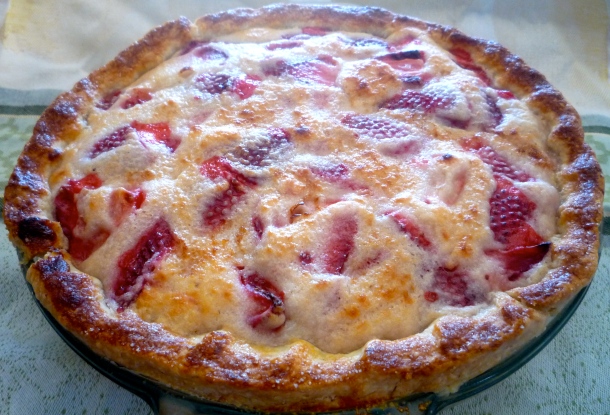 Okay so this won’t post until late Pi day (3/14) but I figured I just need to get this up because I had made a pie, it was Pi Day and I needed to post something.  I was debating about wether or not to post this because I didn’t get a picture of the pie after it was cut.  Let’s just call it a brainfart and move on. I am sorry it has been awhile but SO MUCH is coming up!  I need to stop dreading doing things and just do them.  Things get done faster that way.  Things I am not dreading are the ideas I have coming up of things to bake for you.  I LOVE them!  I can’t wait to get started.  I really hope I can bang some stuff out tonight and tomorrow so I won’t be leaving you silent for as long as I did this last week. 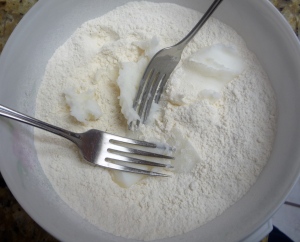 I used butter too.

This is my second time making a pie crust and instead of trying to fit all the ingredients into my mini-chopper (I don’t have a food processor!) I decided to kick it old school and work the dough with two forks (I don’t even have a pastry cutter).  It totally worked!  Julie from Willow Bird Baking recommended using lard in the crust and I would have to say she was right.  May I recommend, however, not tasting the dough till it is cooked cause then you could get a crumb of lard in the bit you are tasting and that may make you want to spit it out and completely question what you are doing.  Once it is baked it will be completely awesome. 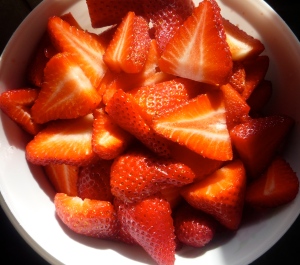 Are you drooling yet?

So in the interest of more and better future stories and recipes to make, I am going to leave you early with some GeekyLinks and the recipe.  First up is an awesome story about how How Dolphins Say Hello.  It is just the neatest thing ever!  Next up is some Princess Bride awesomeness.  Lastly, is something I REALLY want but will NEVER be able to afford Harry Potter Wizards Collection. 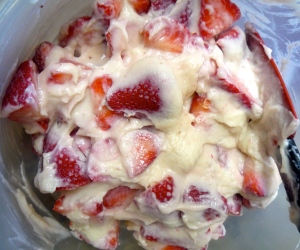 1 quart (4 cups) fresh strawberries, sliced in half lengthwise (I had a few thick ones that I sliced into fours)

To make the crust, whisk flour, salt and sugar together in a medium bowl.  Add in pieces of lard and mix in with forks or a pastry cutter until the lard is mixed in completely.  Add in pieces of butter and mix in the same way until butter pieces are no larger than small peas.  Add 3 tablespoons of water and thoroughly mix in still using one of forks.  If the dough remains dry and doesn’t come together completely, then add the last tablespoon of water.  If you need to use a few sprinkles more, that is fine but only add as little as required to make the dough into a ball.  Flatten the dough into a disk, wrap it in plastic and refrigerate for 20-30 minutes.

At this point, wash and hull the strawberries and slice them in half and set aside.

After your dough has chilled, roll the disk of dough to around 2 inches larger than your pie plate and then transfer it.  Fold the excess dough around the edges of the plate and crimp, trimming where necessary.  Or you can do what I did and trim it all and then roll it out into a rope long enough to fit around the plate and then press it into the top of the dough that was trimmed and then crimp it.

Sift flour, sugar and salt into a large mixing bowl.  Add the yogurt and mix until creamy.  Gently fold in the berries without overmixing.  Pour the filling into the pie shell and spread to the edges without packing it down.  You should see spaces throughout the filling.  Sprinkle the top with the remaining sugar.

Bake the pie for 10 minutes, then reduce the heat to 350° and bake an additional 30 minutes or until the crust is golden brown.

Broil the pie for 2-3 minutes to brown the top of the pie (moving around as needed to get an even browning).   Now comes the hard part (because it smells DIVINE), allow to cool completely before cutting.  You can serve with whipped cream or ice cream but I found them totally unnecessary.

My name is Celina. I am a wife and mother of three. I love to bake, go to the movies, read when I can and I am kind of a great big nerd. Just don't tell my husband.
View all posts by NerdyBaker »
← Cream Cheese Wontons and an Oscar Party
Rainy St. Patrick’s Day in Southern California →